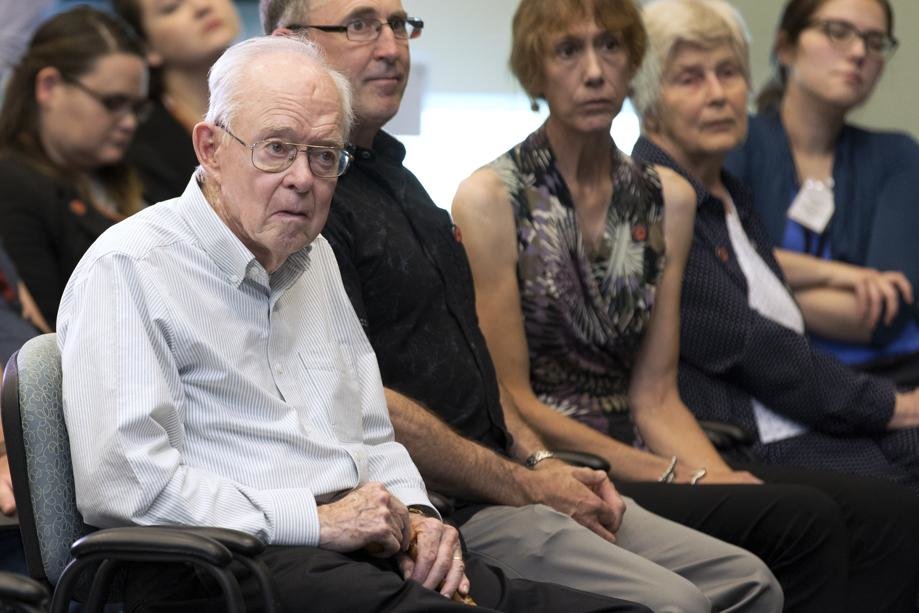 In this Thursday, Aug. 9, 2018, astrophysicist Eugene Parker attends a news conference about the Parker Solar Probe named after him, at the Kennedy Space Center in Florida. Sixty years ago, the young astrophysicist proposed the existence of solar wind. Many were skeptical and told him to read up on it first “so you don't make these killer mistakes," he recalls.NASA 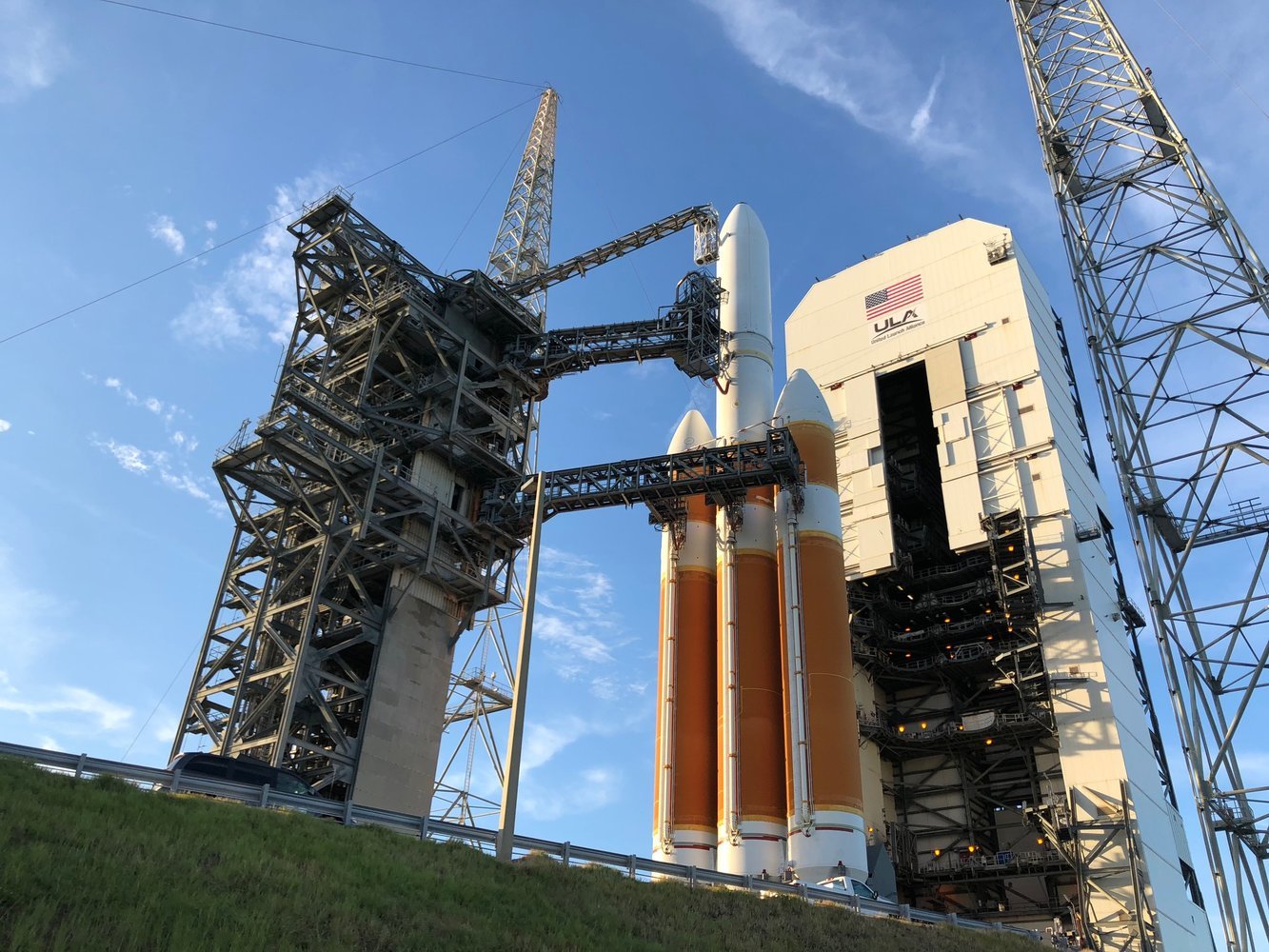 CAPE CANAVERAL, Fla. -  A NASA spacecraft zoomed toward the sun Sunday on an unprecedented quest to get closer to our star than anything ever sent before. NASA

As soon as this fall, the Parker Solar Probe will fly straight through the wispy edges of the sun's corona, or outer atmosphere, that was visible during last August's total solar eclipse. It eventually will get within 3.8 million (6 million kilometers) of the surface in the years ahead, staying comfortably cool despite the extreme heat and radiation, and allowing scientists to vicariously explore the sun in a way never before possible.

No wonder scientists consider it the coolest, hottest mission under the sun, and what better day to launch to the sun than Sunday as NASA noted.

"All I can say is, 'Wow, here we go.' We're in for some learning over the next several years," said Eugene Parker, the 91-year-old astrophysicist for whom the spacecraft is named.

Protected by a revolutionary new carbon heat shield and other high-tech wonders, the spacecraft will zip past Venus in October. That will set up the first solar encounter in November.

Altogether, the Parker probe will make 24 close approaches to the sun on the seven-year, $1.5 billion undertaking.

For the second straight day, thousands of spectators jammed the launch site in the middle of the night as well as surrounding towns, including Parker and his family. He proposed the existence of solar wind — a steady, supersonic stream of particles blasting off the sun — 60 years ago.

It was the first time NASA named a spacecraft after someone still alive, and Parker wasn't about to let it take off without him. Saturday morning's launch attempt was foiled by last-minute technical trouble. But Sunday gave way to complete success.

The Delta IV Heavy rocket thundered into the pre-dawn darkness, thrilling onlookers for miles around as it climbed through a clear, star-studded sky. NASA needed the mighty 23-story rocket, plus a third stage, to get the diminutive Parker probe — the size of a small car and well under a ton — racing toward the sun.

From Earth, it is 93 million miles (150 million kilometers) to the sun, and the Parker probe will be within 4 percent of that distance at its closest. That will be seven times closer than previous spacecraft.

It was the first rocket launch ever witnessed by Parker, professor emeritus at the University of Chicago. He came away impressed, saying it was like looking at the Taj Mahal for years in photos and then beholding "the real thing" in India.

"I really have to turn from biting my nails in getting it launched, to thinking about all the interesting things which I don't know yet and which will be made clear, I assume, over the next five or six or seven years," Parker said on NASA TV.

Thomas Zurbuchen, NASA's science mission chief, was thrilled not only with the launch, but Parker's presence.

"I'm in awe," Zurbuchen said. "What a milestone. Also what's so cool is hanging out with Parker during all this and seeing his emotion, too."

Nothing from Planet Earth has ever hit that kind of speed.

Even Fox has difficulty comprehending the mission's derring-do.

Zurbuchen considers the sun the most important star in our universe — it's ours, after all — and so this is one of NASA's big-time strategic missions. By better understanding the sun's life-giving and sometimes violent nature, Earthlings can better protect satellites and astronauts in orbit, and power grids on the ground, he noted. In today's tech-dependent society, everyone stands to benefit.

With this first-of-its-kind stellar mission, scientists hope to unlock the many mysteries of the sun, a commonplace yellow dwarf star around 4.5 billion years old. Among the puzzlers: Why is the corona hundreds of times hotter than the surface of the sun and why is the sun's atmosphere continually expanding and accelerating, as Parker accurately predicted in 1958?

"The only way we can do that is to finally go up and touch the sun," Fox said. "We've looked at it. We've studied it from missions that are close in, even as close as the planet Mercury. But we have to go there."

The spacecraft's heat shield will serve as an umbrella, shading the science instruments during the close, critical solar junctures. Sensors on the spacecraft will make certain the heat shield faces the sun at the right times. If there's any tilting, the spacecraft will correct itself so nothing gets fried. With a communication lag time of 16 minutes, the spacecraft must fend for itself at the sun. The Johns Hopkins flight controllers in Laurel, Maryland, will be too far away to help.

A mission to get close up and personal with our star has been on NASA's books since 1958. The trick was making the spacecraft small, compact and light enough to travel at incredible speeds, while surviving the sun's punishing environment and the extreme change in temperature when the spacecraft is out near Venus.

"We've had to wait so long for our technology to catch up with our dreams," Fox said. "It's incredible to be standing here today."

More than 1 million names are aboard the spacecraft, submitted last spring by space enthusiasts, as well as photos of Parker, the man, and a copy of his 1958 landmark paper on solar wind.

The Associated Press Health & Science Department receives support from the Howard Hughes Medical Institute's Department of Science Education. The AP is solely responsible for all content.